Hey folks, been a bitofabusybas’ lately! Planning and scheming and…ironing, y’know, stuff like that. So this is just a quick post to share a wee video with you. You might have already seen it crop up on this bit of the Internet or that other bit or even one of my favourite bits, but here it is on my blog too. It’s my cover of the song Not Perfect by Tim Minchin. I hope you like it.

Hello folks! You look lovely today, as always. My updates are still a little sporadic due to the process of changing where it is that I live from one place to a different place. However, I’ve managed to steal some internet from a local kebab shop by perching on the roof at nighttime, which has given me time to discover the video I’m about to post. Some of you might know that I recently played an event called Dust It Off at the Old Hairdressers, alongside Laura and Thom and Julia and the Doogans. Our performances were captured by the guys at LIVEFLY (you can watch Julia and the Doogans’ performance at this link here) and have recently been uploaded to their site. I was recovering from throat-and-chest-and-sinus badness at the time but I think I got away with it (apart from pointing it out) so I thought I’d share the video with you lovely lot.

Hope you enjoyed it! Feel free to comment/rate and whatnot.

Oh and yes, I did notice that it says “Shambless Miller” at the start. It’s true, I have no shambs to speak of.
(This has been rectified, but I’m leaving this bit in because I like that shite joke. You understand.)

Til next time folks! 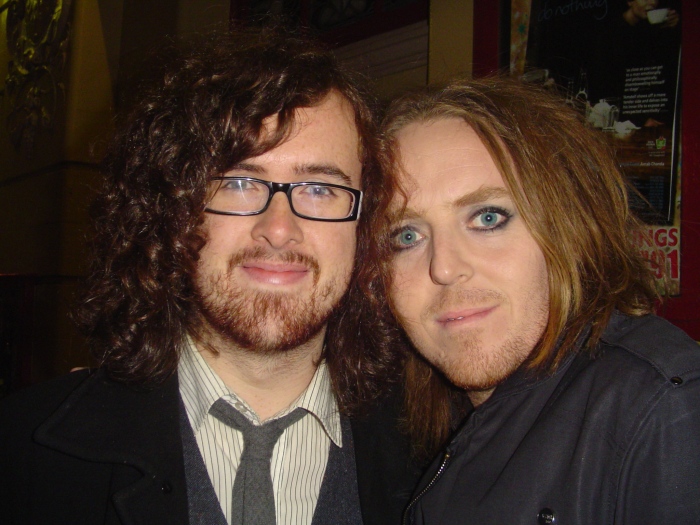 Ok so. In my previous post I mentioned some adventures, despite not having any physical proof as I usually do since my adventures tend to occur in my house (lies, i’m a party animal) so here’s a further update. As well as my amazing night at/after the Frank Turner gig, this was also the week where I was lucky enough to meet Tim Minchin, as my lovely missus was interviewing him for Stereokill.net You can find the podcast of the interview here. Its bloody good by the way. You can also see my review of the gig here.

He was an absolutely charming, lovely man. I don’t normally get excited when men hug me, but Tim Minchin is an exception. A big ginger exception. I’m allowed to say that, I have a tinge of the ginge.

As you might remember, I also mentioned that I beatboxed with Beans On Toast after the Frank Turner gig, before Frank came on and took over. See for yourself, ladies and gentlemen…

Thats right. THAT ACTUALLY HAPPENED. THREE FUCKING MINUTES OF ME GOING “boots n cats” AND SOMEHOW I DIDN’T PASS OUT. Funny funny guy though. Frank took over beatboxing duties just afterwards but I think his skillz paled in comparison to mine. Decide for yourself, the other videos are here.

So now i’m just gearing up for Oxjam, as i’m sure most of you already know, i’m opening the Acoustic Riot stage in the 13th Note on Saturday the 24th of October. Its a big deal and I hope some of you will come along and support me. More on that soon :) Remember you can still get tickets/wristbands! More details soon!

Oh and I now have a Last.fm page that someone created, just search for Shambles Miller!

Til next time folks,

(the human boots and cats beatbox)